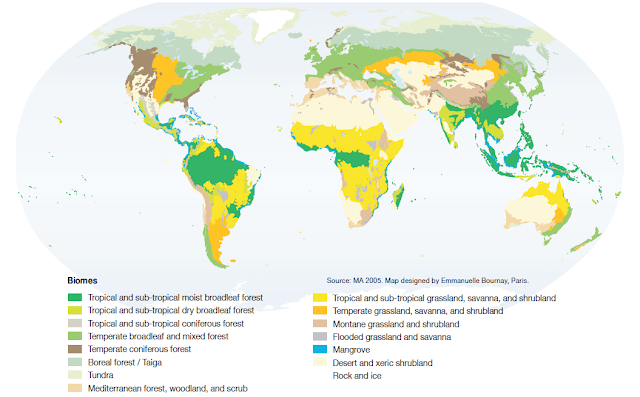 Year-round high temperatures and abundant rainfall makes this a dense, lush forest. Tropical rain forests are found near the equator. They are vital storehouses of biodiversity on the planet, and yet face severe threat today, with much of their original extent depleted.

These are found to the sound and north of the tropical forests. The trees here are adapted to resist the summer drought.

These forests are found to the south of the temperate regions around the coasts of the Mediterranean, California, Chile and Western Australia. The growing season is short and almost all trees are evergreen, but mixed hardwood and softwood.

Found in such places as eastern North America, northeastern Asia, and western and eastern Europe, temperate forests are a mix of deciduous and coniferous evergreen trees. Usually, the broad-leaved hardwood trees shed leaves annually. There are well-defined seasons with a distinct winter and sufficient rainfall.

Coniferous forests inhabit the cold, windy regions around the poles. There are both hardwoods and conifers found in this region. The conifers are evergreen and structurally adapted to withstand the long drought-like conditions of the long winters, whereas the hardwoods are deciduous.

These are also known as cloud forests because they receive most of their precipitation from the mist or fog that comes up from the lowlands. Some of these montane woodlands and grasslands are found in high-elevation tropical, subtropical and temperate zones.

Plants and animals in these forests are adapted to withstanding the cold, wet conditions and intense sunlight. Trees are mainly conifers.

There are around 140 million hectares of “plantation forests” in the world, accounting for around 7% of global forest cover. The productivity of planted forests, in terms of supplying a sustainable volume of timber and fibre, is usually greater than natural forests. Plantations produce around 40% of industrial wood.


The Northern Cordillera Forests of Canada are a good example of boreal or taiga forests.

These forests thrive in low annual temperatures and precipitation of 40-100cm per year, which mainly falls as snow. The nutrient poor soils favour conifer species, although some species of deciduous trees also feature.

Set amongst the Rocky Mountains, the Hyland Highland, the Boreal Mountains, the Yukon-Stikine Highlands, and the Pelly and northern Cassiar Mountains the plants growing within this ecoregion differ according to elevation. At the highest alpine regions grow dwarf rhododendrons and laurels, dwarf birches, willows, and lichens. The middle, or subalpine, areas contain forests of fir, black spruce, and white spruce. The warmer low elevation boreal forests are composed of lodgepole pine, white and black spruce, paper birch, and aspen.

Lodgepole pine and aspen depend on the natural fires of the ecoregion to regenerate their forests.

The Northern Cordillera has been called the Serengeti of the North due to the wide variety of species found here. Moose, caribou, mountain goats, bison, Stone's and Dall's sheep, black bears, grizzly bears, weasels, red foxes, beavers, arctic ground squirrels, snowshoe hares, pikas, muskrats, wolves, and wolverines call it home. Overhead and on the ground, you might also find several species of birds, including ptarmigan, spruce grouse, snowy owls, waterfowl, cranes, and ruffed grouse. At the end of summer, herds of caribou undertake a spectacular migration as they head south to escape the harsh winter.


Both the plantation area and contribution to world wood production are projected to continue to increase in the foreseeable future.

Posted by Unknown at Monday, September 24, 2012 No comments: 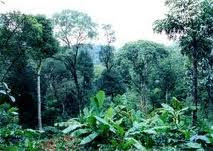 with object (usually as adjective forested)

Middle English (in the sense 'wooded area kept for hunting', also denoting any uncultivated land): via Old French from late Latin forestis (silva), literally '(wood) outside', from Latin foris 'outside'
Defining what constitutes a forest is not easy. A recent study of the various definitions of forests (Lund 2008) found that more than 800 different definitions for forests and wooded areas were in use round the world. A definition based on physical characteristics, such as the canopy cover, will most likely be used for an assessment of the forest extent.

An overall assessment carried out on a regional or global level is unlikely to satisfy more detailed national level requirements. Conversely, a definition developed to suit the needs of any given country is unlikely to be applicable at a global level.The Food and Agriculture Organization of the United Nations (FAO) has been assessing the world’s forest resources at regular intervals. Its Global Forest Resources Assessments (FRA) are based on data provided by individual countries, using an agreed global definition of forest which includes a minimum threshold for the height of trees (5 m), at least 10 per cent crown cover (canopy density deter mined by estimating the area of ground shaded by the crown of the trees) and a minimum forest area size (0.5 hectares). Urban parks, orchards and other agricultural tree crops are excluded from this definition – as are agroforestry systems used for agriculture. According to this definition there are at present just under 4 billion hectares of forest in the world, covering in all about 29.7% of the world’s land area (FAO 2006a) and 10% is in Canada.

Forest, usually also mean the combination of tress, wildlife, shrubs, herbs, mosses, etc in a dense group. There are several definition of forest defined by many countries, NGOs, INGOs and well knowned person in Forestry. A forest is a highly complex, constantly changing environment made up of a variety of living things (wildlife, trees, shrubs, wildflowers, ferns, mosses, lichens, fungi and microscopic soil organisms) and non-living things (water, nutrients, rocks, sunlight and air).

Forest types differ widely, determined by factors including latitude, temperature, rainfall patterns, soil composition and human activity. The types of forest is discussed in the next post. Thank you.

Posted by Unknown at Monday, September 24, 2012 No comments:

History of Institute of Forestry in Nepal

The Institute of Forestry (IOF) is the only institution in Nepal for training middle and high level professional in forestry and natural resource management (NRM). Started as the Nepal Forestry Institute run by Singh Durbar, Kathmandu, in 1947, it was relocated to Suping (Bhim Phedi) from 1957-58 and again in Hetauda in 1965 for better physical facilities established by the Indian Cooperation Mission (ICM). The institute was managed by the Department of Forests until July 1972, when it was incorporated into the Tribhuvan University System. Here it started its new era as the Institute of Forestry (IOF). The IOF expanded its training programs in 1981 to Pokhara where the infrastructure of the Central campus was developed with technical and financial assistance from the World Bank, International Development Agency (IDA), United States Agency for International Development (USAID) and the International Tropical Timber Organization (ITTO)..

IOF has further grown and added Nine Master is different despairs degree programme, & with M.Phil & Ph.D. Community Forestry at Pokhara. IOF/TU is also collaborating currently with NORAGRIC of the Agricultural University of Norway (AUN) in implementing Master of Science in Management of Natural Resources and Sustainable Agriculture (M.Sc. in MNRSA) programme partially at Pokhara. IOF's two Campuses are administered by separate Campus Chiefs under the leadership of the Dean of the Institute of Forestry. The Dean is supported by two assistance deans in steering the course of IOF into the 21st century.
Posted by Unknown at Monday, September 24, 2012 No comments: